O my god that sunshine at beach…… ❤ 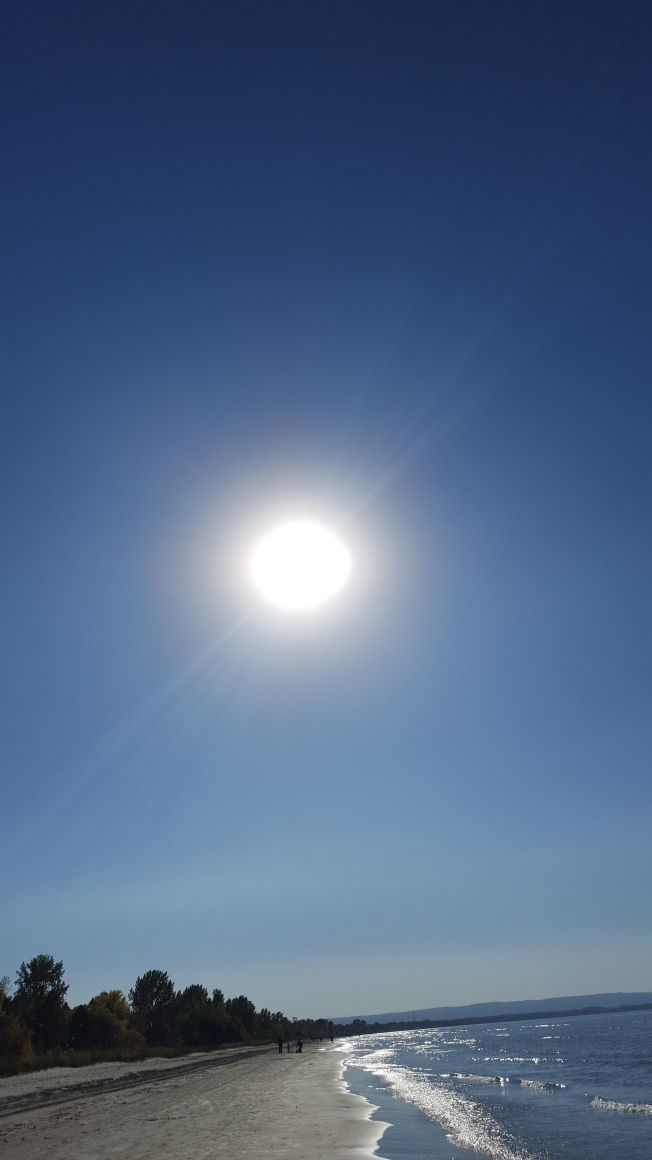 Falls illumination…. natural one is the best…. Rainbow 😊 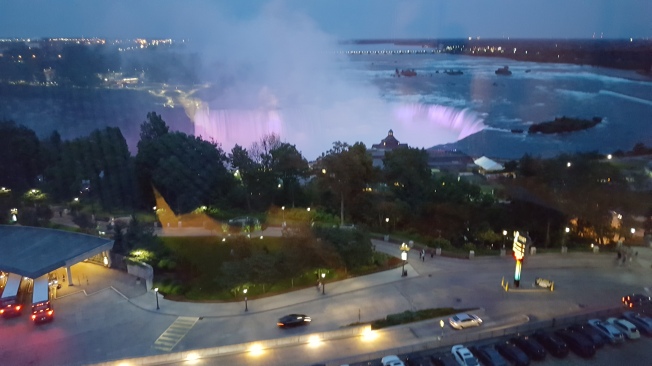 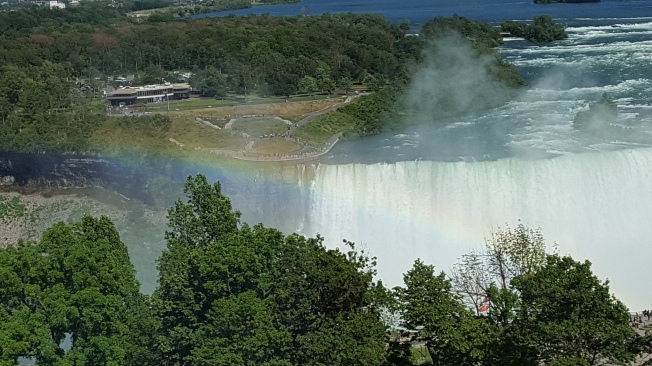 NATURE IN ALL ITS GLORY

Wondering how to make the impossible happen? Journalist Elizabeth Johnson tells us how she secured one of the few slots to see America’s most photogenic waterfall.

The five waterfalls near Supai thunder powerfully across the desert, their reverberations so strong they thrum in your chest. Havasu Falls is an oasis in the truest sense, a patch of land surrounded by dry dust. The Havasupai Indian tribe, known as the people of the blue-green waters, have guarded it for centuries.

Hikers trek ten miles in each direction for a chance to see the falls and swim in the aquamarine waters. For years, it has been on my bucket list. But there’s one problem: It’s on everyone else’s, too.

You have a better chance of getting into Hogwarts University or scoring front-row tickets to a Beyoncé concert than scoring the rare permit to visit Havasu Falls. The tribe begins selling camping reservations by phone on February 1. Some 250 slots are available each night. Within days, they sell out for the entire calendar year.

The first day permits went on sale, I called around 2,000 times — really. After hours of busy signals, I dejectedly scrolled through Twitter, wondering if there was anyone who had gotten the so-called golden ticket.

“At least a half-dozen of us called ALL DAY and no one got through,” said one tweet.

The tales of woe continued, “This is all I have ever wanted,” read another woman’s post.

But on the second day, after calling another 2,344 times and nearly throwing my iPhone out a seventh-floor office window, I experienced a miracle. (A miracle bigger than my seventh-grade crush calling me after school on my landline.) A link to an online reservation system surfaced online. The tribe had quietly launched the website days before. 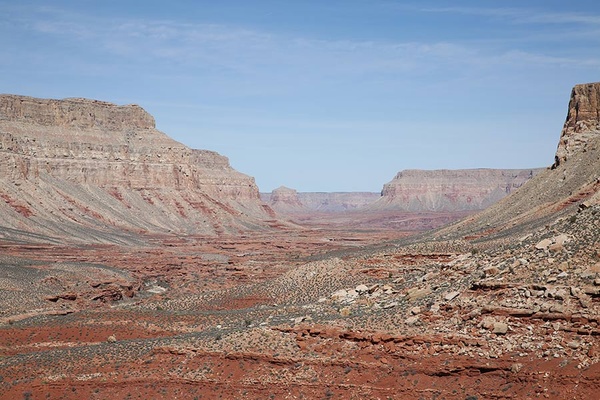 Desert as far as the eye can see. 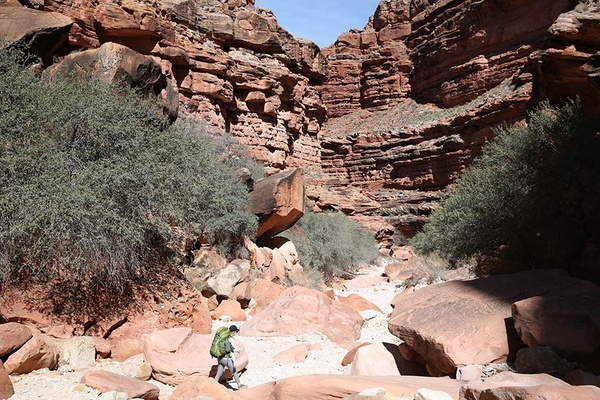 Hiking through the rocks. 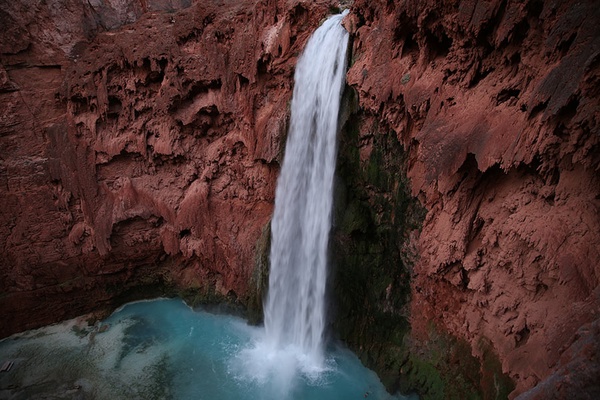 I snatched camping permits for three nights in March, then called every relative and friend in my contact list to fill them in. My joy was unparalleled. I had gotten my beloved Havasu camping permits. Is this the pride new parents feel when they see their first-born?

One month later, my boyfriend Loren and I stood at the trailhead on Hualapai Hilltop. We landed at McCarran International Airport (LAS) in Las Vegas the night before, then drove through scrubby desert to sleep in the parking lot. We each carried one gallon of water and snacks raided from the aisles of REI.

Now we just had to survive the hike. (And by “we,” I mean “me.”) The first two miles descended down a series of switchbacks to the valley floor below. The following six miles were a slow descent. There was no shade, and small pebbles became lodged in our shoes. But the sun was bright and the trail deserted. I ate all of my snacks and Loren’s, too.

It felt like no time at all when we reached Supai Village, the most isolated town in the continental United States. On either side of dirt streets were crumbling houses strung with Christmas lights and tinsel. Small children biked past the only grocery store, and horses carried cartons of mail to the post office. Above us were towering craggy cliffs sculpted long ago by icebergs. It felt like a different world, one stopped in time.

After checking in at the office, we had another two miles of hiking to campgrounds in the canyon. My head throbbed from the heat and the dust. “How am I going to get out of here?” the little voice in the back of my head said. “SOS, helicopter my corpse out.”

And then we rounded the corner. Loren grabbed my hand, and we stood in awe. Turquoise water streamed over the edge of a cliff, plunging into a stream way down below. Clusters of campers with sweat stains on their T-shirts peered over the path at the waterfall, their backpacks tossed to the ground. The only sound was the roar of water and the thrumming of my racing heart.

If it’s the last item I check off my bucket list, I will die happy. 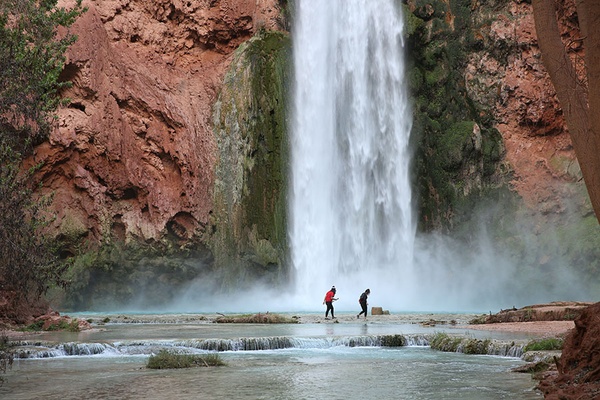 A view worth the work. 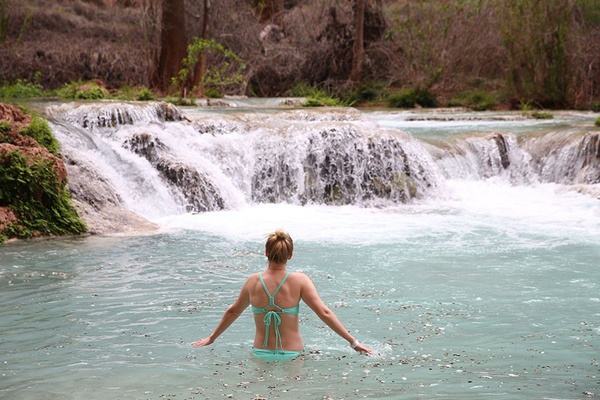 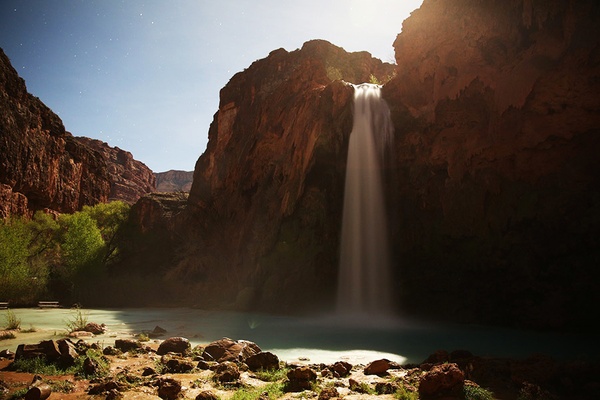